Halfway into my Mid-Atlantic running trip having already completed three runs, I was in it. I was in a flow state of being in the passenger seat, hopping out for a run, and doing it all over again the next day. The plan for West Virginia would be a little different though. I would go it alone, which I find peaceful. But I would also have to drive alone from Bethesda, which I find stressful. Still, I readied myself with warm clothes, a granola bar and the destination of Harpers Ferry. It would be an adventure. So when I couldn’t find my rental car in my friend’s parking garage I was both panicked and energized.

“Where is this car? Am I crazy? Wait. Look at that parking permit sign.”

We did. It seemed to indicate that my rental car had been towed.

“They must have towed it. Oh my gosh,” She said.

The sunlit, bright sky of Pennsylvania Amish country had turned to a gray horizon speckled with barren tress as we headed west. Not the kind of day I’d typically be energized for a run, but a crackle of excitement was in the air just the same: I was going to West Virginia, for the first time, with one of my best friends. I’d chosen Harper’s Ferry because not only was it closest spot in West Virginia from Bethesda, but because it is also a part of history. There’s the American history of the Civil War but also my own history. My dad had hiked this portion—and beyond—of the Appalachian Trail. Tucked between my imagined stories of the Civil War and my dad’s experience on the AT was the real experience of hundreds of others who had also hiked the AT. Since this run would be the 25th  state, marking the halfway point, I hoped, in my own way, to be a part of that story.

Harpers Ferry reminded me other towns I’d visited. It had the forgotten silence of a Galena, Illinois coupled with the tucked away charm of an Asheville, North Carolina. Leaves blew across empty sidewalks as we gripped iron rails to climb a steep, stone-stepped hill to Jefferson Rock. We looked out at a white church steeple, the meeting of the Potomac and Shenandoah Rivers in the background. Thomas Jefferson had stood here in the late 1700s, his memory confirming in the grandest way that history was in fact everywhere. In a candy shop—more like a museum, really– my friend and I were the only visitors for 30 minutes as the owner shared the history of American candy. When you dive into a subject, such candy or say… running, it is never really about just that subject but stories that cross pollinate into neighboring worlds. The owner had worked in DC government years prior but candy was her area of expertise now.

“It’s all people and politics.”

We nodded, bought horehounds and sound balls and made our way into the cold. At John Brown’s Fort, the only Civil War armory building to evade destruction, my friend snapped a photo. I look cold, but happy. My friend waved me off. She would get a cocoa, she said. So I sprinted across the railroad bridge and began. This was it. I was running on the Appalachian Trail, a million tiny stories layered upon each other. There weren’t too many people out that cool, gray day but I did encounter a family of three. The parents had big backpacks which I took as sign that they were AT hikers. Our stories had met. Then, in the most non-Seattle gesture, catching me off-guard, they said “hi.”  “Hi,” I replied in a puff of air, affirming our meeting.

After 3 miles I jogged back to the car. We got inside, warmed up and I looked around at the historic landmark signs. I thought about that powerful Potomac.  Then I thought about how I had crossed the bridge to run on the AT. And if I had run on the other side of the river which served as the state border I had most likely not done what I had set out to do. I had run in Maryland, not West Virginia. 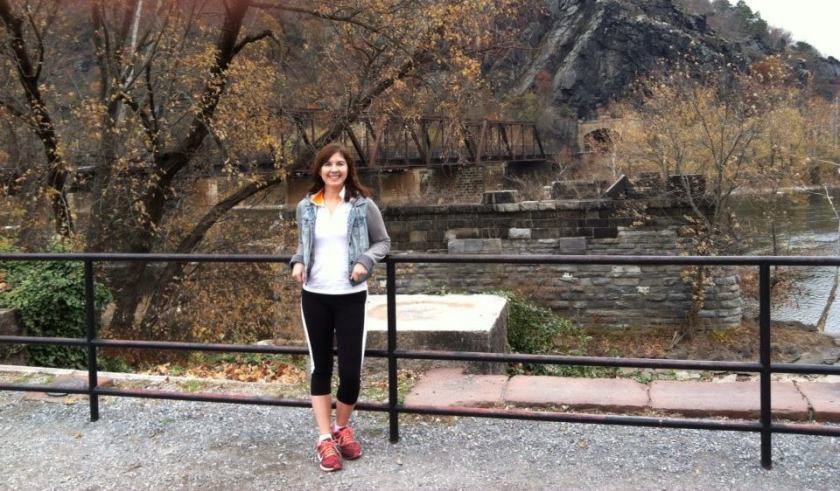