I’d been looking forward to running in Colorado. I was staying with a high school friend and her family in Denver. Since I’d had to drive a couple hours and back to do my cross-the-border Wyoming run the day before, running from right outside their front door would be a welcome treat. To sweeten the deal, their neighborhood of Stapleton, the flat site of the old airport terminal, is built around Central Park. No, not that Central Park, though in some ways it was similar. This Central Park was also rectangular, had a few hills, waterways, intersecting paths, and plenty of drinking fountains for the hot morning run. All I would have to worry about was the altitude. And after my first altitude run the day before in Wyoming, I felt ready—so ready that I thought I’d throw another variable into the mix. I’d run with my friends’ Labradoodle Chloe.

I’m pretty picky about my pooches. I’ve never had a dog and tended to either adore or despise friends’ dogs. Nevertheless, Chloe seemed pretty chill. My friend Laura told me to give her leash plenty of slack and not to wrap it around my wrist, just in case she ran off. If another dog approached us she suggested I simply try to ignore it and Chloe would do the same. “Don’t led her lead you,” she said. It all seemed like rather profound advice, veiled in dog-walking speak: “give others space,” “don’t hold on too tightly,” “don’t channel your energy into unwelcome distractions,” “lead your own life.” Chloe and I started down Laura’s charming tree-lined street in a jaunty walk, both of us (I assumed) eager to be out in the sunshine doing our thing. Not even three houses down Chloe paused, sniffed around the grass for what seemed like forever and relieved herself. “Is this how it’s going to be?” I wondered. After a stop at the trash bin I resolved that in running, as in life, the only way to know is to begin and see.

We did begin and Chloe didn’t pause again for the entire 3.1 miles. She had so much energy, such bright eyes and spirited swagger, that I understood why so many runners were lured and kept running because they have to give their dogs a workout. She was motivating me. Sure I thought about the altitude and the heat but much less so because I was hyper aware of her safety and enjoyment. I had a responsibility to Chloe. Suddenly my piddly little 5K in 50 states wasn’t the big thing. The big thing was keeping up with this dog. That was a side of running I’d never experienced before. And as I thought about how different it was to run with a dog I started to think about how different everything in Denver, specifically Stapleton, was from my life in Seattle.

The first difference I noticed was the climate. I’d never been to Denver, or even Colorado, and I couldn’t get over how bright it was. We’d had a few sunny weeks in Seattle but they was nothing compared to the bright sun of Denver. Maybe it was that mile-high altitude, but I truly felt closer to the sun. The air was dry like Phoenix but the land was green like Seattle. I kept thinking about how I really was in the middle of the country because it reminded me of other places I’d been to north and south. Even Laura’s neighborhood of Stapleton couldn’t have been more different from my neighborhood and many parts of Seattle. Instead of cars parked on both sides of the street, playing chicken and waiting out one car after the next, Stapleton’s arterials seem to stretch for miles, with no parking problems. Instead of hills, Stapleton was flat, reaching to the distant Rocky Mountains. One could truly run for miles. The whole neighborhood was dotted with parks and swimming pools families could walk and bike to. In my neighborhood in Seattle, families seem hidden. Because it’s crowded with businesses, trendy restaurants, and homeless people, those children’s voices are a little bit harder to hear. The streets of Stapleton were nothing but families. Within those wide, flat streets were rows of well-kept houses with well-manicured lawns and flags waving from the front porch. After looking at the bright lawns I told Laura I felt like I was in the movie Pleasantville or at Disney World’ Main Street USA. I called it idyllic. Laura smiled, knowingly, that of course nothing was ever perfect. I knew that too but it looked perfect. I couldn’t believe any place could even look so idyllic, even if it wasn’t on the inside.

We spent the evenings eating dinner on the back deck with the kids and then sipping Colorado beer on the front porch as the nights turned cool. As often happens when I visit high school friends, I reminded Laura of funny stories from the past and tried to better understand their life in Denver. I wanted some clue as to how I could apply what worked in family-focused Stapleton to my single girl life in Seattle. “How’s your commute?” “Do your friends smoke pot?” “How much has the property value increased?” There was so much to learn from a family of four, but translating it to my world would be difficult.

Or maybe not. Turns out we are sort of the people we were in high school, there are just a million tiny choices in between. It’s easy to get stuck on the irreversibility of those choices. You can’t go back in time anyway. But, on that run in my 35th state I thought about the billions of lives happening across the country and how it was so good to experience a life different from my own, even for a few days. Married or single, parenting or childfree, suburbs or city, sunny or rainy, we all could stand to learn a few lessons from running with a high-energy dog.

Don’t hold on too tightly.

Lead your own life.

Most importantly the lesson that only Chloe could teach: Running is fun. Remember to have fun. I looked down at her happy trot, tugged her leash, and led us down the path. 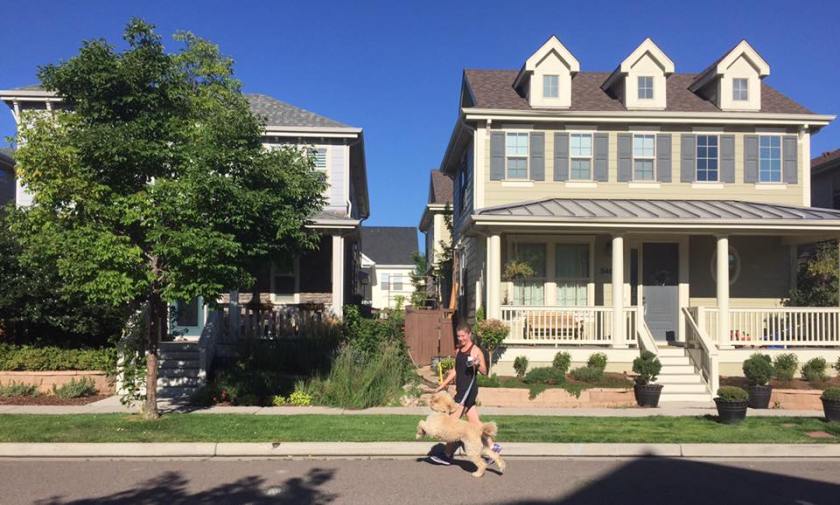