Mississippi was the first state I ran in with my friends Kathleen and Rebecca, which means it’s also the first state I ran in with two people. The first full day of our girls’ trip in Gulf Port, Mississippi, we walked out the front door, turned a couple corners and faced an empty sidewalk. The adjacent wide but uncrowded Beach Blvd., redone after hurricane Katrina, faded into the distance. After we got going I observed that to make room on the sidewalk one of us had to run in front or behind. I didn’t mind bringing up the rear. It gave me space to consider the difference between running with two people compared to one. With three the group must balance each other out rather than defer to the pace of one person. We had to create a new pace as a team. I don’t remember what we talked about but I do remember that because not one but two friends had joined me for a run, maybe I was doing something cool. Maybe for them it was something cool too. It wasn’t a Forrest Gump-like band of followers trailing behind on the open road but it was still a group: a small, trusted, trusting, supportive group.

This week, because my healing ankle, I’ve been thinking about support. I chose an ankle stabilizer that was snug and supported my ankle from all sides. The first straps come up from the bottom of the foot. The second set circle above the ankle. The third set crisscross over the top of the foot and ankle. When I put on the stabilizer in the morning I think about how each of these layers of support is doing its part.

Now, I think about the support of friends. I think about the friends I’ve known for so long that I can sing along to Michael Bolton and still feel respected. I smile reflecting on the college friends I’ve reunited with, joining the lightness and whimsy of college days with the reality of adulthood. I think of the friends I’ve made in Seattle–the ones who’ve formed lives and loves and families but still make time for brunches and dinners to support each other as ladies. The friends who have stuck by my sense of humor for years of giggly laps around Green Lake. The friends who let me collapse on their couch, bubbly in hand, when it’s all too much. The friends who volley with my crass wit in our cozy, red-lit, dive bar. The friends who are new and yet feel familiar. For peace of mind and peace for my ankle, I will think of this support when I wrap the stabilizer–because maybe we all need not one but many layers of support to get back out there. Let’s run together soon. 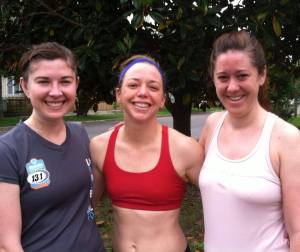